JESUS: Our Banner of Victory Day 6 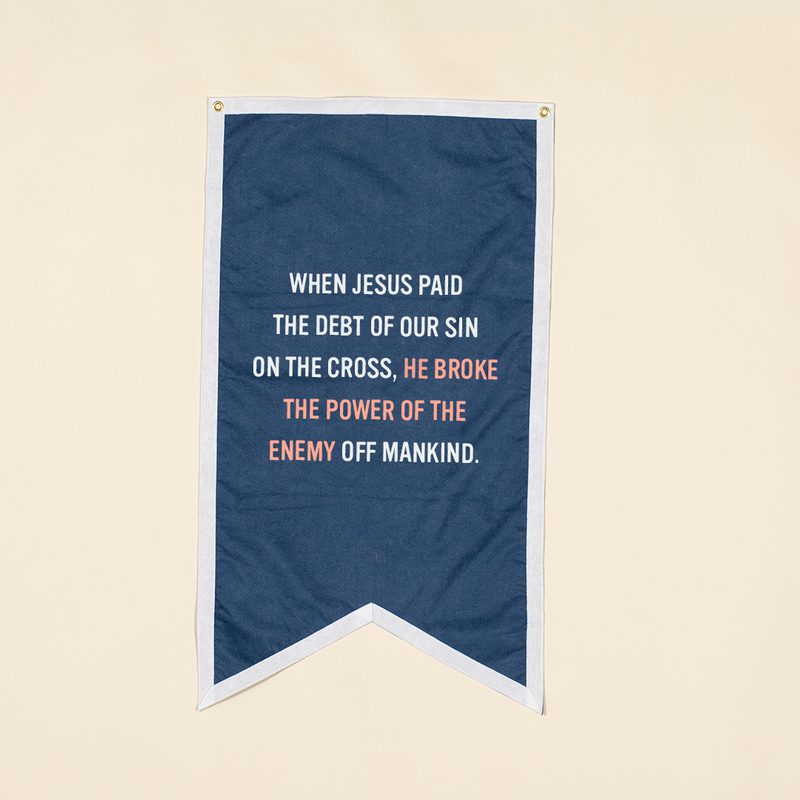 Victory Over Temptation
We don’t need anyone to remind us that temptation is real—never before has so much of the world been so readily available at the click of a button. But do we ever stop to think about the specific ways satan tries to tempt us? We need to understand how temptation works, so we can better defend against it.
In Genesis, satan tempted Eve by questioning God’s Word and His motives, and her response brought sin and death into the world. In 2 Samuel, King David chose to stay at home during “the time when kings go off to war,” sending others to fight in his place. If David had been where God had called him to be, he never would have been alone on the rooftop to see Bathsheba. As a result, we see infidelity and murder introduced to David’s story. And when the Spirit led Jesus into the wilderness in Matthew 4, satan tried to tempt the Son of God Himself by quoting Scripture.
The enemy is constantly working to make us question God’s Word, His plan, and His heart for us. If satan can trap us in this conversation, it’s a slippery slope that will introduce chaos and pain into our lives. But Jesus knows what it’s like to experience the temptation to question God - in fact, He’s gone through every kind of temptation we experience - and He’s made a way for us to reject it and walk in freedom. When Jesus paid the debt of our sin on the cross, He broke the power of the enemy off mankind. Because of His sacrifice, we are no longer subject to satan’s authority!
It’s important to note that walking in Jesus’ victory over temptation takes great intentionality on our part. We need to acknowledge daily that the enemy will try to take back his old territory in our lives and respond by staying alert, building up safeguards to protect our life of freedom in Jesus, asking God for help in the face of temptation, and surrounding ourselves with Godly friends who will hold us accountable. The apostle Paul said in Ephesians 6 that we need to actively put on the armor of God so that we will be able to stand against the devil’s schemes.
As we continue this Easter week, remind yourself that Jesus has rid the enemy of his power in your life. Pray through Ephesians 6:10-18 and put on His armor every day. Thank God for giving you the strength to live in freedom from temptation, and ask Him if there are any areas where your alertness level needs to increase. He will help you identify where you’re weak and empower you to take your stand against the enemy. In Jesus’ victory, you will not be overcome!

Popular posts from this blog

February 21, 2020
I, even I, am he that blotteth out thy transgressions for mine own sake, and will not remember thy sins. Isaiah 43:25 KJV https://bible.com/bible/1/isa.43.25.KJV Charity suffereth long, and is kind; charity envieth not; charity vaunteth not itself, is not puffed up,  Doth not behave itself unseemly, seeketh not her own, is not easily provoked, thinketh no evil; 1 Corinthians 13:4‭-‬5 KJV https://bible.com/bible/1/1co.13.4-5.KJV Follow peace with all men, and holiness, without which no man shall see the Lord:  Looking diligently lest any man fail of the grace of God; lest any root of bitterness springing up trouble you, and thereby many be defiled; Hebrews 12:14‭-‬15 KJV https://bible.com/bible/1/heb.12.14-15.KJV
Read more

February 18, 2020
I beseech you therefore, brethren, by the mercies of God, that ye present your bodies a living sacrifice, holy, acceptable unto God, which is your reasonable service. Romans 12:1 KJV https://bible.com/bible/1/rom.12.1.KJV
Read more

February 18, 2020
And he took bread, and gave thanks, and brake it, and gave unto them, saying, This is my body which is given for you: this do in remembrance of me.  Likewise also the cup after supper, saying, This cup is the new testament in my blood, which is shed for you. Luke 22:19‭-‬20 KJV https://bible.com/bible/1/luk.22.19-20.KJV Then said Jesus unto his disciples, If any man will come after me, let him deny himself, and take up his cross, and follow me.   For whosoever will save his life shall lose it: and whosoever will lose his life for my sake shall find it. Matthew 16:24‭-‬25 KJV https://bible.com/bible/1/mat.16.24-25.KJV
Read more

GOD IS SPEAKING CAN YOU HEAR HIM